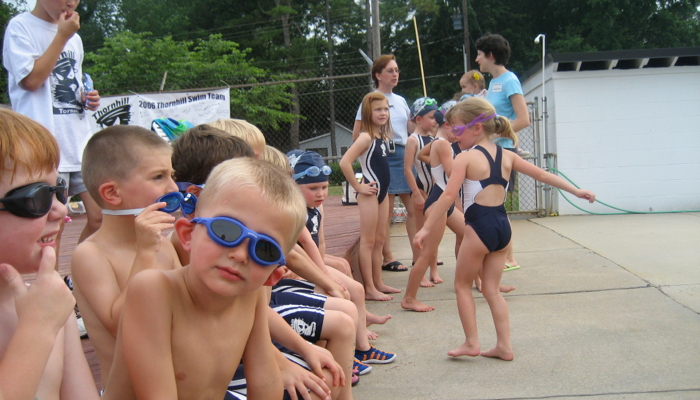 It’s been a couple of months since the last post, which reported the results of Lily’s first doctors appointment. Since then, our news cup doth runneth over (uh, -eth) so let us jump right in. We will handle the other kids in subsequent unread posts.

Starting with the oldest, Logan has been busy on our neighborhood (Thornhill) swim team. He is on the part of the team officially known as “The Shrimps” and on the part of the Shrimps unofficially known as “dead wood’. OK, maybe that’s a bit harsh, but Logan is not the fastest swimmer. He has reached that Lucas-esque status in the league where everyone cheers for him like he is about to win gold. It is cute and great and I have been banned from saying anything other than “Good job, buddy” when I really want to say “Son, please do not stop in the middle of the race to ask me if you can get some Fun Dip out of the vending machine.” This is how a typical race goes:

I am constantly assured that Logan’s current swimming ability is “very typical” of first year Shrimps, which only causes me to try and convince myself that the other first year Shrimps are all prodigies. Either way, Logan is having a BALL and doesn’t seem to care that all his ribbons are white “I Did My Best” ones. As long as he is having fun, that is what matters. His mother firmly believes that and his father does a commendable job faking it.

Since we are spending most of our summer around the pool, Logan’s latest obsession is getting something out of the vending machine. He will stand next to it, watching other (and MUCH more fortunate) kids get Honey Buns, YoGos, and whatever other God-forsaken garbage they offer. He is allowed to get something on occasion, which we have taken to calling his “fix”. We have considered taking him to the Dolly Madison Clinic for a rehab-stint, so we’ll keep you posted. I find myself pining for air-conditioner or USA related quirks.

Anyway, Logan is having a great summer. The pictures with this post should be proof enough.