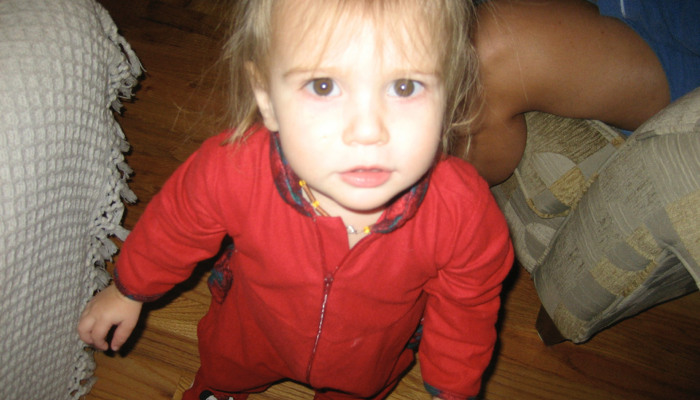 So, if from chaos comes order, then we should have a rear-end load of order coming.  The morning happenings in this house are to chaos what a horrifically large, all-consuming hell-sent fire is to a match.  Most days start out during the night, with one of the two older conspirators waking us because of a dream or a noise or a dare.  Chaos loves sleep deprivation like Logan loves electric pencil sharpeners (which is a lot).  Once the morning swings around, I am up when the dawn hasn’t even considered cracking to do my rite against obesity.  This is the quietest hour of the day, unless you include my freakishly old-sounding wheezings, which I don’t.  Directly after the ritual, I have from the time I stop to when I enter the house to feel satisfied and enjoy the morning tranquility.

It is then that I open the door to Hell’s Library.   Often, when I join the carnival, Lily is already eating.  And by “eating” I mean decorating her area with food of varying phases of chewed-ness.  “Lily,” I say sternly, “don’t throw your food. No!”.  Jill supports my parenting attempt with “Glenn, she doesn’t understand yet.  She’s too young.”  Of course, I take that to mean “I want to spoil her rotten and you are the worst parent in the history of the Free World, including Bette Davis.”  An exchange occurs, and then Jill has made The List.  People on The List either get no talking or only sarcasm.  Jill doesn’t like being on The List, but she doesn’t avoid it either.  Oh, and during our exchange, Lily has put on a mostly empty banana peel as a hat and air-hankied onto her plate.  I give Jill the “Fine, she’s YOURS NOW” look and turn to the others (kind of like that movie “The Others”, only scarier).

Emma is in her daily tantrum about her glasses.  “THEY’RE FOOOOOGGGGGYYYYY.”  OK, they’re foggy, so I clean them, give them back to her, and turn around.  “THEY’RE FOOOOOOGGGYYY!”  When I turn to face Emma again, it looks like she has ridden her glasses in a rodeo.  In an immeasurably short instant, her glasses are a blindfold.  “I don’t WANT GLASSSSES!”  I tell her (sternly, duh) that she has to wear them or her head will fall off and Charmer will be swallowed up by the Earth.  Jill comes over and cleans them, then two bluebirds fly in and take them from Jill, placing the sparklingly clear glasses gently on to Emma’s nose.  Then everyone, but me, breaks out into a song about rainbows and puppies.

Logan is frantically racing through his peanut butter toast and grits like he is in an eating contest.  “What’s up, Logan?” I ask, praying i will relate to one of the children.  “Daddy, there is a pencil in Mommy’s office that I didn’t sharpen,”  he says, shattering my earlier hope.  “I want to sharpen it before school.”  When I walk into Jill’s office, I see the pencil jar filled with point-up sharpened pencils.  It looks like some sort of literary torture device.  I start to think that, if I am ever attacked by a pack of ninjas in this house, I need to get to this jar first.  Logan grabs a pencil that is usable yet not quite at glass-cutting sharpness and goes to work.

I go upstairs to shower, hoping some of the oddness of our house will wash off me and down the drain.   Lily follows me up and I think that she is on to Phase 2 of her artwork.  The Phase 1 art was the food sprinkler she just executed, and the next phase is to paint “Uncomfortable Naked Man” in the steam on our shower stall.  Even she seems  grossed out by her subject, so she quickly moves into “Find the Most Dangerous Item in the Room and Stick it in Your Mouth.”  I hate this game, especially during my shower, as I feel like I am trapped in a water prison watching my offspring do Fear Factor.  As Lily grabs something, I say “No, Lily.  Put that down.  JIIIIILLLL!  COME UP HERE PLEASE!”  Jill isn’t coming because, I am guessing, someone has to run the camera and make sure it captures my desperate nakedness.  “LILY!  DON’T PUT THAT IN YOUR MOUT….DANG IT!”  I leap from the shower, soaking the floor and baby.  I am now beyond being self-conscious, so I walk downstairs (in full view of our sunshine window) with Lily and hand her to Jill.  Jill doesn’t even look up (would you?) and takes Lily as if I am delivering a loaf of bread.  I stomp back upstairs and angrily finish my shower.

After that, the older two are off to school and I am off to work.  The chaos level drops significantly with the older two gone, so I can concentrate on working and wondering when the “Naked, Wet Daddy Saves Child from Drinking Face Wash” video will show up on YouTube.