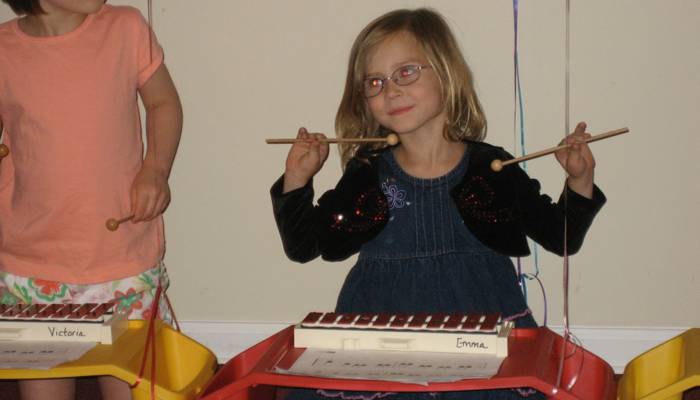 We try, at the Goodrich house, to inject music into our lives. I live on the iPod, have bought Jill a Nano and the kids have been going to Kindermusik since they could sit up straight. As such, each of us has a set of songs that we claim as our own. Not surprisingly, Daddy has made much of the song assignments since Mommy has the musical knowledge of a recently unfrozen cavewoman. This post is to briefly explain why the songs were chosen and if they even make sense at all.

At our wedding, Jill and I danced to “Fields of Gold” by Sting. Not an uncommon choice, I am sure, as it mentions lovey-dovey stuff and growing old. We were young (24) at the time, so the fact that we didn’t pick “A Blister in the Sun” by the Violent Femmes is our small victory. I will say, however, that I still consider “Fields of Gold’ our song and, at the risk of sounding mushy, it’s the only thing besides Jill that can take me back to that day. And no, for you smart-alecs in the crowd, Jill doesn’t have violent, ‘Nam-like flashbacks when she hears it. We actually selected all the songs for our wedding video, the rest of which consisted of songs like “Love and Luck” by Jimmy Buffett and “Good Things” by The BoDeans. All the songs remind me of us, obviously, but the Sting song holds the throne.

Back to present day, we can move on to Logan. The boy is probably the most musical of the three kids, right now. He loves to play his Kindermusik instruments (the glockenspiel and recorder) and he has several favorite songs. I gave him “Long December” by the Counting Crows, based entirely on 2 points: 1) He was born in December (duh) and 2) It talks about the following year being better than the last. The idea is that our lives are better with Logan, which I would agree with entirely. As for other songs, I couldn’t find a good OCD song, so if anyone knows of a song that repeats the phrase “air-conditioner Fun Dip, I write in cursive” over and over, lemme know. Oh, and I am considering adding “We Are Family” by Sister Sledge to the Logan list, simply because I like the idea of him singing “I got all my sisters and me.”

Emma is the easiest kid to put to music. When she isn’t ordering someone around or yelling at her parents, she is singing sweetly. Emma sings in the car, on the bike, while drawing and almost any other time that doesn’t involve speaking. I have often thought that it is simply a way to keep her mouth moving and I have to confess that I LOVE her singing. It is one of the best things I know. Anyway, much for the same reason Logan got his song, Emma got “September” by Earth, Wind, and Fire. It is upbeat and fun, just like Emma. The lyrics don’t make a hell of a lot of sense, but this is art and can’t be judged in such manners. I also used to sing “Little Miss Magic” by Jimmy Buffett to her as a baby. It is a bit of a cliche choice, especially among Parrotheads, but it’s a beautiful song to sing to your daughter. Finally, there is a lesser known song by Michael Torcher called “Sooner or Later” that has the following line:

That pretty much sums up Emma.

Lily is still young and, as such, only has a single song. Jill and I went and saw “Mamma Mia” (which I highly recommend) last week and one of the songs “Super Trouper” (all the music is by ABBA) inspired me to attach it to Lily. The reason is because I sing a made-up song to Lily that is a collection of “ooper” words, for example “Lily is my super duper baby trooper”, etc. The song lyrics don’t make much sense as it’s about a singer going on stage and facing the crowd knowing their love is someone in it. I know, I know, but the chorus does talk about the “Trouper” “shining like the sun, smiling having fun” which is Lily to a tee. Oh, and she lights up when she hears it, like she knows it’s her song. It’s arguably the cutest thing in the history of the civilized world. And no, I am not exaggerating.

My guess is that if the kids were to select a song for Daddy it would be the “Imperial March” from the Star Wars movies. The nerd in me, of course, likes the idea, but maybe I need a new soundtrack. I think I will strive for something like “Looking Through Patient Eyes” by P.M. Dawn (a song that I think I should play for Jill daily…) Anyway, it is an interesting exercise applying a soundtrack to your life. Try it.