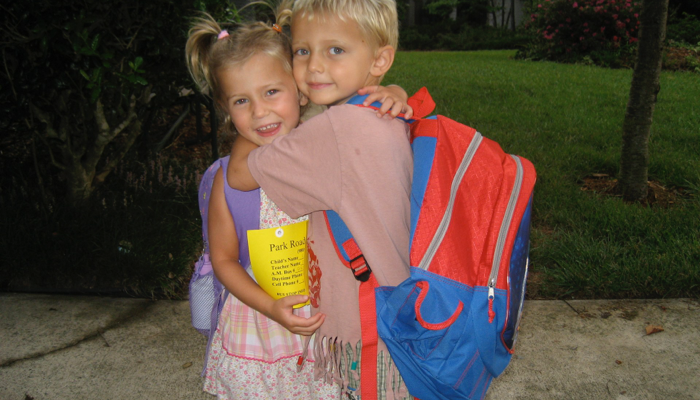 So, yet again I find myself going on two months between posts. Thank goodness no one reads these posts.

Anyhoo, the big news of this week is SCHOOL HAS STARTED WOOOOOOOOOOHOOOOOOOOOOOOOOOOOO! (ahem) Sorry, but it’s just such a beautiful thing. The kids are gone for much of the day, they are learning (we hope, but frankly it’s not a deal breaker for us), and when they return, they are exhausted. I just (sniff…sniff) oh, I swore I wasn’t gonna cry (sob).

Right. Sorry again. Logan started kindergarten Aug 25th and Emma started Pre-K the following Wednesday. Both kids were VERY excited about going to school, as were both parents. Lily even smiled about it (although she is always smiling). The first day was a bit wacky, as the bus driver didn’t think she could pull in to the parking lot where she was meant to pick up the kids. She was quoted as saying “I thought it was West Berlin.” So, and I am not making this up, we put Logan in a van with a COMPLETE STRANGER who offered to take him (to school, I think, but I wasn’t really prying at that point). So, Logan went off to school and loves it, especially doing “fractions” where they deal with “1 half, 2 halfs, 3 halfs, and 4 halfs”. Oh, I guess I forgot to mention that the school is a Montessori (A teaching technique created by Antonio Montessori, an Italian who passionately believed that quirky kids deserved their own learning space) school. Jill knows what that means, all I know is they let Logan come back every day.

Emma is going to Pre-K at the same school. She only goes ‘til 1 p.m., after which Jill has to go get her. On her first day Logan spent the morning saying things like “C’MON Emma! We don’t want to be late! WHAT PART OF C’MON DON’T YOU UNDERSTAND?!?” until Jill distracted him with maps of the United States made out of Fun Dip (BTW, Makers of Fun Dip be warned that I am coming after you). Lily is still the happiest baby in the history of the world. In fact, when she cries, it means one of the following:

She is starting to teethe, so the smiling is curtailing some these days. Oh, and she started rolling over on August 12th, which is the same day Jill rolled over (as a baby, not this year. She’s really good at it.) Finally, the older kids are obsessed with her, where she has reached the same status as vending machine fodder or Charmer. It’s cute, in a back-away-from-the-baby-before-you-hurt-her-or-I-have-a-myocardial-infarction way.

I am actually in Atlanta working and getting ready for the GT - Notre Dame game, which is almost as exciting as school starting. Jill encouraged me to go ahead to Atlanta this week after I made T-shirts that said “The Gipper Molests Collies.”

Jill is spending her time not sleeping and being awake. I have no idea how she does it, but thank goodness she does b/c I would’ve hawked at least one or more (at a quantity discount, of course) of them by this point.

See you in 2 months.