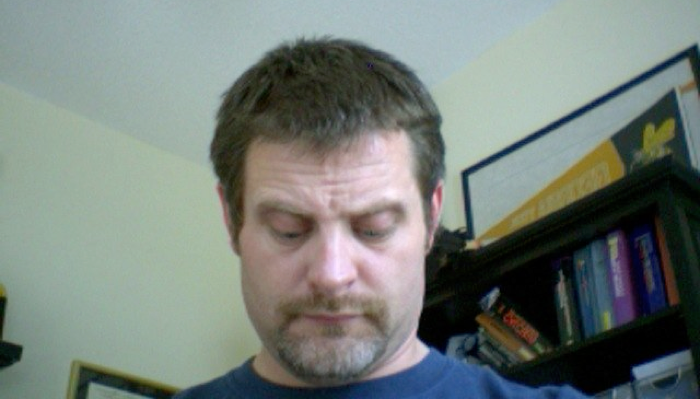 Waking up this fine Friday morning, I feel a sense of anticipation.  A sense that this day is the end of one era, and the beginning of the another.  I spring out of bed, skip to the window and lean out into the cool morning air.  On the street below, there stands a young vagabond.  “Oi!”, I say, “What day is it?”  The boy looks up and replies “Why, it’s the day of your vasectomy, sir.”  Relieved, I shoot back “Good!  I haven’t missed it!  Boy, run down to the local market and fetch me the largest bag of frozen peas they have.  Right away!” and I flip him a coin.  He catches it and takes off on his errand.  It is then that I realize I can understand the birds singing.  “Good morning, Glenn, “ one Robin says as it lands on my window sill, “I bet you are excited  today!  It’s a good day to get clipped, no?”  As a couple of other birds join our little party, we break out into a song entitled “No More Little Blessings” and we float down the stairs to the kitchen in a scene as Disney-esque as they come.

As the kids funnel into the kitchen one-by-one for breakfast, their curiosity is apparent.  “Why are you so happy, Dad?  And who were you singing with?”  I explain to them that, after today, their mother and I won’t have to worry about being  (I do air quotes here)  “blessed” by any more (airquotes) “bundles of joy.”  Jill pulls me aside here and explains that if I don’t stop with the (she does airquotes) “airquotes” that I am going to get a (airquotes) “homemade” vasectomy.  I excuse Jill’s rebuke, realizing that she wasn’t part of my earlier Disney film and remembering that she will have to watch all our current “blessings” after today’s procedure while I sit on Mount Frozen Corn and watch TV.

Once the kids shuffle off to school and Jill leaves for her morning walk, I excitedly start my preparations.  (Editor’s Note:  From this point on you will be exposed to details and information that can only be described as too personal and icky.  In other words, Grammie, stop reading now.)  The doctor said I needed to, erm, shave (we’ll call it “mowing the grass”) the area before heading to his office.  Since I am not an Olympic swimmer or stripper, I have never done this before.  In fact, I Googled it (using a phrase that no one should ever have to Google), which didn’t really tell me anything I didn’t already surmise, but gave me a new  comfort level with the whole thing.   So, I fired up the mower.  There are a couple of realizations that came out of my lawn care experience:

When Jill returned from her walk, I kicked my leg up on the kitchen table and started shaking my hips (I didn’t say I was a GOOD stripper.).  She, being somewhat used to exposure to a moron, said nothing and started talking about the day.  “If you want to get your stuff from Target, you need to do it now because I need the car later.”  The “stuff” she mentioned consists of a bag of frozen corn and an athletic supporter.  So, I hip-shaked my way to Target to obtain these final items.

While in Target, I bumped into a friend of ours from the neighborhood.  It ended up being one of those exchanges that makes people never willingly approach me to say “hi” again.

Me (with corn and jock in hand):  Good.  Look what I am holding.  Can you guess what is happening today?

Robyn (already backing away slowly):  Um, no, I can’t.

I thought about offering her a lap dance, but remembered I had to focus and get home.  Besides, she was gone in a hurry.

Roughly an hour before the procedure, I took a Valium that the doctor had prescribed at the consult.  I am not sure if he does that for everyone, but when I started to cry as he explained the procedure, he wrote out the prescription.  The valium did wonders.  It completely mellowed me out, to the point  where Jill is trying to get some on the black market.  The one negative effect is it seemed to amplify my stripper-esque tendencies, causing me to never completely stop shaking my hips at any point.  We arrived at the doctor’s office and I was sent to the room almost immediately.  The nurse came in and told me to take off my clothes, at which point I stuck my hand out.  The “freshly-shorn vasectomy patient feeling like a stripper” symptom must be quite common, because she immediately said “You are not a stripper.”  So, I got all prepped on the table and put on my earphones (I had planned to listen to music to distract me) and attempted to get in the right mental state.  Unfortunately, everyone involved in this procedure can apparently initiate and carry on a conversation with anyone.  Personally, I find it hard to chit-chat when one of the conversation participants is not wearing pants.  Not these people.  Also, there is pretty much NO CHANCE I could discuss my kids or the weather in  a pants-free environment when someone is actively working on the depants-ed individual.

Once the nurse left, I did finally start listening to music (Kenny Loggins “I’m Free”, which I thought appropriate) until the doctor came in.  He also was into the small (no reflection on me) talk, which was even more disconcerting because he is stitching and clipping and (for Pete’s sake) soldering my, um, area.  I did my best to converse, probably sounding like a prisoner trying to hold on to secrets in the torture chamber.

The pain aspect of the procedure (Note:  I understand that this is nothing compared to child birth, so any woman who has been through that can keep their smug comments to themselves) wasn’t too bad.  The only real memorable part regarding pain was that the left side hurt much more than the right.  According to Dr. Chit-Chat, that is always the case.  When I asked why, he said “I don’t know,” which caused me a bit of panic.  I mean, if some guy is cauterizing my equipment, I’d like him to pretty much know everything about that equipment.

With the procedure complete, I gingerly walked to check out and paid my co-pay.  When the receptionist gave me my change, I started the hip-shake and took off my shirt.  Without even looking up, she said “You are not a stripper.”  Although, I did get a “WOOO” from an elderly woman in the waiting room.

So, now it’s frozen peas (for which I have a new found respect and love) and corn for 24 hours and no lifting kids.  It’ll be about 6 weeks before all the little soldiers are gone, but the major battle is now behind us.  If I could take one lesson away from the whole experience, it would be:

I am not a stripper.