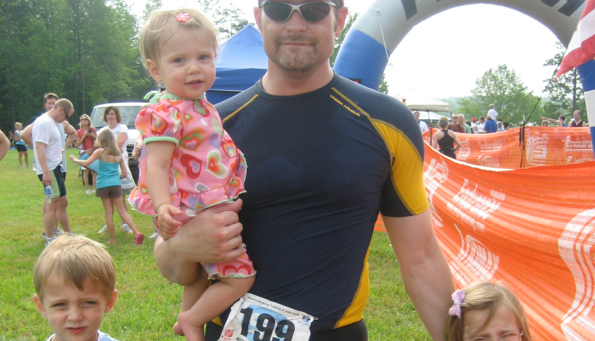 On May 12th, yours truly participated in a sprint triathlon. The sprint variety means it is shorter, not that I sprinted the whole way. Or even part of the way. The triathlon distances are summed up in the following table.

Triathlon Distances and the Women Who Love Them

I have no idea why I agreed to do this, other than my fear of being buried in a piano case. Also, I was coerced into it by 2 of my friends (term used loosely) and my “blind-to-myself” ego. So, for the past 14 weeks we’ve been going to spin class and swimming and running and doing “bricks” (combination bike/run days) and fighting the gag reflex. I did enough training to actually be excited about the race and forego any further thoughts of faking the plague or claiming “female problems” on race day.

Fortunately for any of you that are reading this, I have no pictures of me in my swim garb. Painting a picture [Editor’s note: Skip to the next paragraph if you have recently eaten or have a semi-vivid imagination.]. I stood on the shores of Cane Creek Reservoir in a speedo (tight shorts, not the banana hammock), goggles, and a swim cap. At best, I must’ve looked like someone had tried to force Stretch Armstrong through an eyedropper after painting his head red and scratching off his eyeballs.

Standing on the shore, I am still excited. Naive enough to be looking forward to the race, I plunge into the the water with 50 other men (we went in waves; my guess is my wave looked like they were the Special Boy Guard) and start freestyling like Mark Spitz. This lasts for a good 14 seconds, when I get kicked in the face. I stop, look around, and promptly get kicked in the face. At this point, I start screaming any spy secrets (real and fake) that I can come up with, figuring I am being shaken down. Recovering, I start the breast stroke and manage to kick someone else in the head. Again, I stop and realize that I am a good 200 meters from the shore IN THE MIDDLE OF A LAKE! I start to get mildly worried, but figure I will get over it and start to freestyle again, but I accidentally swallow about 16 ounces of lake. Again, I stop and look at that dot in the distance that I presume to be the land. “Calm down, Glenn. You can do this,” I think. I close my eyes and go to take in a deep breath that is composed entirely of more lake. The freak out is officially on, as I now must look like someone who woke up in the middle of the lake. I roll over on my back and kick slowly, taking what I figure to be my last look at the blue, blue sky and consider calling over the Boat of Saviors (the race has boats for people that mess themselves in the swim, kind of like I am doing). The only thing that stops me is fear of mocking from my “friends” in the race. I stay on my back around the second and third buoys (each of which I have to fight myself not to embrace like it’s V-Day) and somehow regain my composure. The rest of the swim is uneventful, although my transition on to land must have looked like a drunk castaway coming ashore.

A quick stumble to the Transition Area and I have to get my skin tight shirt (why I went skin tight on everything is a mystery even to me. It’s like I was hoping to gross out the competition) and hop on the bike. The bike ride was my favorite part by far, and the part I performed the best. Also, there were at least 5 dead snakes on the route, which made me think the race organizers tried to save money on route markers by using dead snakes instead: “Every time you see one of them scaly critters, hang a Louie.”

Off the bike, I rip off my (skin-tight) helmet and start to run. Well, I try to start to run, but my legs have been replaced by dead snakes. They won’t move. Slowly, they come to life and I get to the first of 4 lengths on the same piece of road where I see my family driving in to catch the end of the race. (Side note: I wasn’t about to ask Jill to lug 3 stinkers to a 8:00 race 40 minutes from our house. If I had, that area would have probably lost more than snakes, so we agreed they would come for the end.). They wave and go to the start of the run course and wait for me to pass by again. At this point, I am delirious. I am so exhausted that a stiff wind could’ve easily made me plod in place. I see the van with my wife and children hanging out, all smiling and I await their words of encouragement to get me through the end of this hell. Here it comes….I need their support….

Now, there aren’t many situations in a man’s life where he will consider giving a six year-old the finger, but I thought long and hard about it. Instead, I wave and smile weakly and trod on.

On the last length, my legs finally come all the way back and are ready to run. I pick it up, just a bit for the home stretch where everyone is cheering and my “friends” are done, giving me encouragement. It’s a great feeling to know that you are going to finish a triathlon and then, once recovered, exact revenge on your “friends” when they least expect it. I finished in 1:36.

So, I did it. It was hard, but for some unknown reason, I think I am gonna do another. Jill wants me to do one for charity, so I am looking for one benefiting the snake families who have lost loved ones due to senseless triathlons.