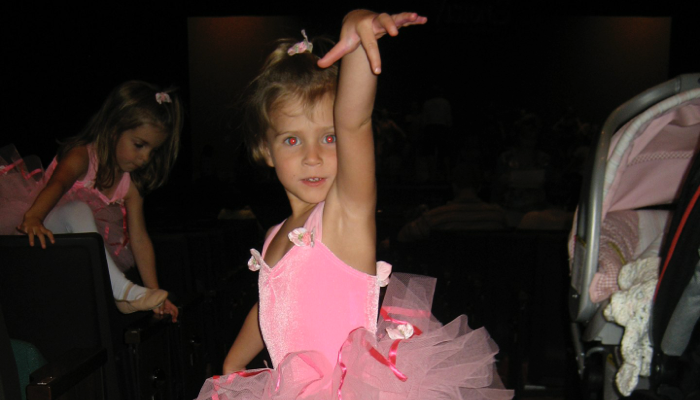 The first part of Emma’s summer has been dominated a bit by preparations for her “Dance Recital”. She is the youngest in her class, and it shows. Her recital was on June 14th, and Gaga and Poppy (Glenn’s parents) happen to be in town to see it, something they consider a lucky coincidence. Just not sure which kind of luck…..

Anyway, the recital is made up of routines from, as far as I can tell, every dance team in the Solar System. It started at 5:00 pm and lasted til past 9:00 p.m.. Thankfully, Emma’s troupe went eighth, which meant we were out of there by 6:00 like we were shot out of a gun. The scene on stage consists of very cute kids dancing to only the beat in their heads, wearing outfits that I am guessing were also designed by 4 and 5 year olds. The older (defined as 12 and higher, as far as I can tell) all wear costumes that, in this Father of 2 girls’ humble opinion, need to come with an MPAA rating. The scene in the audience is quite different. The mix is dominated by parents whose own dance dreams, I presume, were cut short by lack of talent or opportunity or a diagnosis of utter insanity. People angrily reserving entire rows after (another presumption) camping out for days like Elvis was going to be on stage. Some of the moms are dressed to the nines, dads cheering on young girls that look as much in place at this recital as they would in the Red District. All in all, I felt like I was an observer for some type of sociological experiment.

Emma on stage was worth the wait, I will have to say. It looked like her dance teachers had focused on a routine made up mainly of staring at each other and screaming at the top of your lungs. Each of the girls were given a doll to fling around while they awkwardly performed only bits of the complete routine. It should be obvious to the reader that Emma was by far the cutest girl on the stage. In fact, I felt a small pang of pity for the other girls’ parents, knowing their kids were just a backdrop to Emma G. ;) Afterwards, we went back stage to get Emma, Logan (who had worn a tie for the occasion) gave her a bouquet of flowers. How cute is that?

Emma was allowed to pick any restaurant in Charlotte for dinner that evening, and she chose Chili’s. Culture AND Sophistication all rolled up into one little girl.