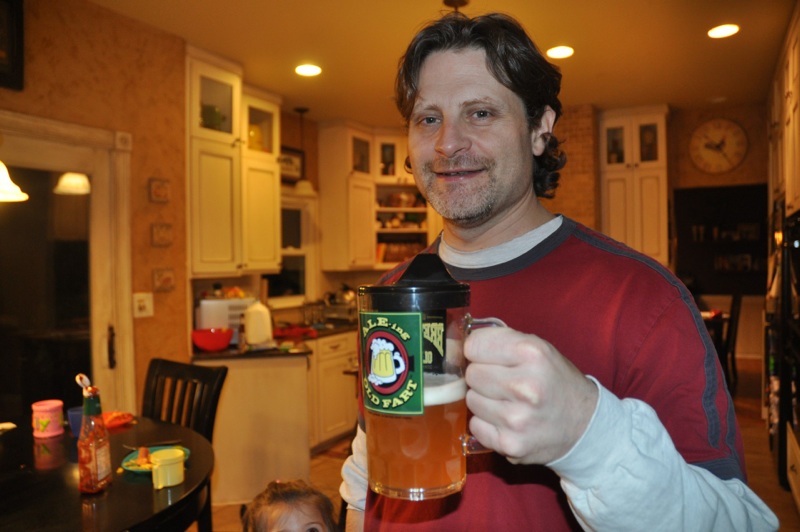 So, 2011 is here, and with it, my 40th birthday. I got to the top of Age Mountain on January 7th (day before Elvis, thankya, thankyaverymuch) and was given an appropriately awesome day. I understand that many of you continue to work on January 7th, disrespecting one of the biggest days of the year. Know ye that thy actions have consequences, thy disrespect doth not go unnoticed-eth (or something). For those of you that observed the occasion in the proper manner, I thank you and give you the comfort of knowing that you will be rewarded in the afterlife. The day itself started with the kids giving me birthday hugs and kisses, and me going to Starbucks to get my birthday coffee (A Caramel Machiato, whatever a Machiato is…it was nummers). Horse took me to Chipotle for a Birthday Burrito (Note: I love Chipotle so much that it scares their staff. Really.). Outside of that, the remainder of the day was not really atypical for a Friday… well, besides the 4,000 Birthday Wishes on Facebook. How did we tell people “Happy Birthday” before Facebook? Birthday wishes and looking at pictures of your exes (“HA! She’s fat now!”), that is what Facebook brings to the table. Oh, and I talked to my parents which was, looking back, a clue to the day’s events. My parents did that Grandparents On the Phone deal where they both talk at the same time and interrupt every sentence with “Well, thanks for calling!” and then hang up. It was a super-brief conversation, but I just figured they are grandparents and we had reached that stage. Jill had told me that we (her and I) were going out to eat, so we fed the kids the We’re Going Out Without You Drive-by Dinner (Hot dogs and mac-and-cheese) and opened my gifts:

We did cupcakes with the kids (and Zoe…that furry turd ate two of my cupcakes…) and it was off to dinner. Now, Jill hadn’t told me anything at this point, and so I figured we would head to dinner at some place and one of two things would happen:

On the way out of the garage, she threw my golf clubs into the car. It was 7:30 p.m., cold, and rainy. Needless to say, I was unsure what that meant. We arrived at Ballantyne Country Club, a place that I’ve never been to or thought I was allowed to enter. After she parked, she explained that the Club has an indoor Couples Golf Lesson and Happy Hour. I know, I know, it sounds ridiculous, and I was mildly skeptical until the valet guy working the door asked if we were here for the Couples Golf Lesson and Happy Hour. For whatever reason (read: I am stupid) that sealed it for me. We went down the stairs into an open bar and …

There were roughly 30 people there for my very own Surprise Birthday Party. Enhancing the surprise, my parents and sister were there (from Austin) and I haven’t seen them in over a year-and-a-half. Some friends from Atlanta also showed up (Nick and the Challases) so I felt important and loved and, well, weepy. I am somewhat of a crier, and this kind of situation is a mega-trigger, and I was John Boehner. Apparently, the party was the brainchild of my parents, and it was perfect. I was roasted by my mom, dad, sister, Nick, and Horse, who had a full-on PowerPoint presentation that was embarrassing and, therefore, very well done. Nick had saved some voice messages I left him after one-too-many from decades (seemingly) ago that consisted mostly of censored beeps and screaming. Tara read “40 Words that Describe Glenn” none of which were dirty and some of which I had to look up (tetchy - adj, irritably or peevishly sensitive….sounds about right). We drank and mingled and I got to be the center of attention and I love that. Once the country club had had enough, we went to a local pub to close out the night. Fantastic. So, I guess a question one has to answer at 40 is “What it’s all about?” My short answer is, I have no clue. In fact, what it may be about is not having a clue. However, I do have somethings that I hope it’s all about:

Laughter I am never more happy than when I am laughing, usually at myself. The ability to laugh at yourself is paramount to getting through it all. This came to me quite recently while putting on my pants for the day. I follow the I-am-a-Human-with-Two-Legs approach to putting on pants, where you put on one leg, then pick up the second leg while holding the belt line of the pants, slide your leg in, and pull up the pants. I’ve done it 1000s, if not 10s of 1000s, of times successfully. However, in this instance, the 2nd leg caught the back of the belt line resulting in my looking like a very uncomfortable flamingo. As the momentum of pulling my leg forward to moved up my body, I began to teeter forward and my balance started to go. Now, you might think I said to myself “Hey, I should let go of the pants with my hands, raise my arms, and catch myself on the counter and stop the fall.” Nope. Instead, I thought “FOR GOD’S SAKE, PROTECT THE PANTS!!!” and attempted to use my forehead to catch myself on the counter. This approach was ineffective, as you might imagine, and I cracked my head on the counter, then did the surprisingly long, awkward face-slide down the front of the bathroom cabinet. Once on the ground, I could safely release my pants (which were fine), roll over, and triage the wounds. I laid on the floor for probably a full minute laughing at my silliness. I thought about times in my life where I might have punched the cabinet, cursed, or defenestrated my pants. This time, I laughed about it, and I felt like it was an Experienced Person’s Moment of Clarity. Laugh at yourself, because it works and everyone else is laughing too.

Love It’s a bit cliche, but it’s true. I don’t necessarily mean “love” in the run-across-the-beach-into-each-others-arms kind of way. I mean it more in the it-is-amazing-what-you-end-up-loving kind of way. I bet some examples will clarify. Every so often Jill will reach over and grab my hand while we are watching TV or driving down the road. To many of you, this is a romantic habit, something to remind you of how special your relationship is, etc. It’s a bit like that for me too, but I usually think something like, “she has seen me naked and still wants to touch my bare skin.” That is love, or at least, the kind of thing that love does to you. Another example is Logan’s quirks. He has a metric ton of quirks, ticks, and oddities about him. I have seen the look on other parents’ faces when Logan is gnawing on his fingernails, staring hypnotically into an Air Conditioner, or rattling off some piece of trivia about coins that screams “OBSSESSO!” The look is one of almost pity. I like to return that same look to them. They don’t know how fun it is to be in Logan’s life. Logan probably won’t catch the winning TD for Georgia Tech’s next national championship or lead the NBA in steals, but he is goofy and quicker to laugh than anyone I know. I love each one of his oddities, and each new one makes me love him more. That is the kind of love I am talking about. Not where you learn to love what others don’t, but when you just do. A bit abstract, for sure…maybe I’ll take another crack at describing it again when I am 50.

Happiness is a Nerd, Bugging Out I know people that don’t seem happy. We talk about stuff like getting THE JOB that would make it all better or finding THE HOUSE. These are big, big items that are hard to get right. Pinning happiness to a BIG LIFE ITEM is risky. It’s easier to string a bunch of little happy moments together, I think. I love nerd stuff. If you put me in a room with a laptop and an internet connection, I could stay there indefinitely (and not for any rhymes-with-cornography reasons). Nerding-out is a little thing. Outside of Dorkland, I have a neighborhood full of friends that I see regularly. A night out with the boys or a dinner with another couple is a little thing. Watching Trash TV with Jill is a little thing. What else? Get back into music, for example. Each time I find a new song that I love (like anything off the latest Mumford & Sons latest), it allows me to bug out for just a little while. Bugging out is a little thing and it makes me happy. String enough little happy moments through your life without focusing on the big happy moments so much.

That is the sum total of my Wisdom Upon Turning 40. Not much, but maybe that’s the idea. Simplify as you get older, laugh, love, and the little things that make you happy.